Bob and Trula began using the consultation and fiduciary services of the Foundation in 2000, upon the recommendation of Dr. Bill Whittaker, the President of Clear Creek Baptist Bible College.  Their interest in assisting financially deserving ministerial students began with the death of Bob’s mother.  In addition to requesting memorial gifts in lieu of flowers at her death, they established a perpetual scholarship endowment for Clear Creek students in memory of Bob’s parents.  This endowment is the remainder beneficiary of several charitable trusts the Johnsons have established with the Foundation. 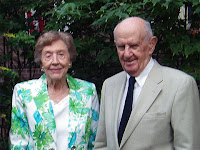 Trula was born in Knoxville, Tennessee, and educated at the University of Tennessee and Transylvania University.  She trained as a medical technologist in Louisville and as a cytology screener at the Cleveland Clinic.  She worked first at Knoxville’s St. Mary’s Hospital, then at the miner’s hospital in Harlan.  In the late 1950s, she transferred to the Lexington Clinic.


Bob was born in Jessamine County, Kentucky, and raised in Fayette County.  Following his service in the U.S. Navy, he attended the University of Kentucky.  After graduation, Bob worked four years for Shely Construction as a field superintendent and then 14 years as an electrical engineer for Kentucky Utilities.


Trula met Bob during a rainstorm when her landlady called Bob, who was a friend, to restore their electricity.  Bob says jokingly, “I didn’t know what I was getting into that night.”  Six years later they married, and what an interesting life they have enjoyed together as global citizens.

Bob became a resident project engineer for an engineering consulting firm that brought them to Pakistan, South Vietnam, New York City and Saudi Arabia over the next decade.  They retired to Knoxville, and Bob earned an MBA from UT.


Feeling too young to retire, Bob became a project engineer for the U.S. Agency for International Development, and they spent the next several years living in Indonesia and Egypt.  In 1988, they fully retired to to be near Trula’s aging father and Bob’s ailing mother, who lived in .  In 1993 they moved to .
During a recent visit with Laurie Valentine and Barry Allen, Trula and Bob acknowledged that the Lord had been so good to them, their parents had been such giving people, and they had discovered this truth: “You can’t outgive the Lord.”

Over the past eight years Trula and Bob have established a number of charitable remainder annuity trusts (CRATS) and one charitable remainder unitrust (CRUT).  They have funded these trusts with gifts of rental property, appreciated stocks and cash.  They also have charitable bequest provisions in their estate planning documents.
Between the charitable gifts they will have made during life and those that will be made at death, the Johnsons’ Christian legacy will be perpetuated through the missions and ministries of ten different religious, educational and benevolent ministries from Kentucky to Tennessee and to the ends of the earth.  At the same time, the Johnsons have made provisions for their family.  We commend them for their prayerful, careful and thorough planning the results of which will be generosity toward God and toward their family.
May others emulate Trula and Bob’s Kingdom-minded stewardship and their use of the consultation and fiduciary services of the Kentucky Baptist Foundation.

More For Christ Via CP Endowment

The Cooperative Program enables us Kentucky Baptists to accomplish more for Christ together than we ever could on our own.  CP funds provide the foundational support for statewide, nationwide and worldwide missions and ministry efforts.

Traditionally, the Cooperative Program is supported primarily by the collective giving of the churches.  However, there are other ways for you to support the Cooperative Program directly through the Kentucky Baptist Foundation.  Let me encourage you to consider one or more of these as you prayerfully plan your longer term stewardship goals.

A legacy gift to the KBF for the CP Endowment Fund is a perpetual investment with eternal implications that will be working literally 24/7 to connect people all over the world to Jesus Christ.  Please call us to assist you.
No comments:

Charitable Giving As Part of Your Business Exit Strategy


Business owners nearing retirement must consider how they will “exit” their business. While some will transfer ownership to a family member, for many the transition out of the business will be through its sale.

A charitable gift of a portion of the business, as part of the exit plan, can provide several benefits: reduction of what may be a significant capital gains tax liability; a charitable income tax deduction based on the market value of the gift; a potential increase in your income if you use a life income charitable gift; and a means of demonstrating your love for the One who entrusted and blessed you with so much.

Adding a charitable gift of some of their ABC stock to their exit planning, before a deal is struck to sell the company, could be beneficial to Jane and Sam. A gift of 30% of the stock ($1,500,000) to a 5% charitable remainder unitrust reduces their capital gains tax liability. Their gift entitles them to a charitable income tax deduction of $538,635, which will provide additional income tax savings. The unitrust will pay Jane and Sam five percent of the value of the trust assets, as revalued each year, for the rest of their lifetimes ($75,000 in the first year) and the remainder of the trust will be distributed, at the survivor’s death, to the charitable organization(s) they name in the trust agreement allowing them to set up significant future support for Kingdom causes important to them. The combination of the unitrust income and the income from investing their net sale proceeds ($2,975,000) results in potentially more income for the Jones’ each year ($223,750 in first year assuming 5 percent earned on sale proceeds).

BY: Barry G. Allen- President & CEO
What a pleasure and a privilege it is to communicate to those individuals, families, churches and church-related organizations to whom we are seeking to encourage, educate and enable about solutions to the stewardship issues related to faith, family and finances.  We use a variety of communication channels because of the variety of channels used by those we seek to serve.  Those channels include personal visits, telephone, email, group presentations, direct mail, the Western Recorder, a quarterly newsletter and the internet. 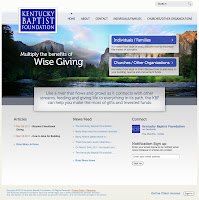 As the ways and the speed with which people communicate continue to change dramatically, we are adapting to those changes in order to stay connected with and to add to our constituents.  Did you know almost 80% of Americans have internet access in their homes?  Did you know the fastest growing group of Facebook users is people age 55 and older?
I am excited to announce we have just launched a new website.  It is much more user friendly, more interactive, has more useful information relevant to a broader multi-generational audience and is integrated with our new Facebook presence and blog.  It was designed and will be maintained using the latest technology.
Let me encourage you right now to click on the site at www.kybaptistfoundation.org and browse.  Whether you are seeking information for yourself or for your church or organ
ization, you will be impressed immediately with the simplicity of the home page from which you can navigate through the channel or channels in which you have an interest.
From the website you can access easily our Facebook page, which includes regularly changing articles and updated news.  Or, you can access Facebook directly at www.facebook.com/KentuckyBaptistFoundation.  Either way, click “like” and enter your email address in the “subscribe” box so you will receive the automatic updates.  If you decide later you do not want the automatic alerts you can unsubscribe at anytime.
Laurie and I will be writing the blogs and would welcome the opportunity to converse with you at www.kentuckybaptistfoundation.blogspot.com , or click “blog” from Facebook.
Let’s stay connected!
No comments: