The Stewardship of Work

As we approach Labor Day 2011 let those of us who have jobs be ever more grateful and ever more mindful and helpful to those who do not.

And, on this Labor Day 2011 I want to call upon us Christians to enlarge our perspective on the work we do to make a living. Regardless of what we do as work it should be considered as more than just making a living but also making a life. It should be seen as a way to invest our lives. Each one of us is on a mission to live in a redemptive way the time God has given us. In our workplace environments we are stewards of our time as well as stewards of the opportunities to serve the Lord with purpose, love and passion. By finding mission and purpose in our jobs, we are able to endure any circumstance that may arise, and that ability to endure is what gives dignity to the work.

One of my favorite quotes was spoken by Winton Churchill: “We make a living by what we get, but we make a life by what we give.” I encourage you to incorporate that spirit into whatever job you have and from which you make a living.

Also, this Labor Day is a good time to reflect upon the mind boggling extent of creation, the complexity of God’s work and the awesome responsibility which is ours as God’s gift from the perspective of the glorious Davidic hymn of praise in Psalm 8. The Psalm begins with “O Lord, our Lord, how majestic is your name in all the earth!” Then the question is asked “what is man that you are mindful of him, the son of man that you care for him?” And the Psalmist declared “you made him ruler over the works of your hands; you put everything under his feet: all flocks and herds, and the beast of the field, the birds of the air, and the fish of the sea….” Wow, what a stewardship responsibility!
No comments:

A Mother's Love & Her Son's Heart For Serving Jesus Christ 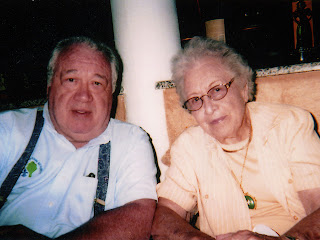 Flora Dalton, a retired nurse, established with the Kentucky Baptist Foundation the Flora Elizabeth Dalton & Joel Dean Wilson Memorial Fund as a tribute to her late son, who died of cancer July 2005 at age 64. This endowment will serve as a perpetual legacy to Flora’s love for Christ and His mission in this world, to her love for her son and his “heart for serving Jesus Christ.”

According to Flora, who died in February 2009, Joel’s life of service could be summed up with these three Christian service words: student, servant, and steward. Growing up in a suburb of Cincinnati, Ohio Joel walked to church alone because his parents had to work to provide for the family. In response to God’s call at age 15, Joel began his preparation for ministry while still in high school. Later he graduated from Bob Jones University and Arlington Baptist Seminary. He was ordained to the gospel ministry by Grace Baptist Church in 1971.

Throughout his adult life, Joel utilized with a passion the gifts with which God had endowed him in a variety of full-time and bi-vocational ministries, including music, pastoral, Christian education, coaching and church planting. He was involved in starting new churches and Christian schools in Alabama, Florida, Kentucky and South Carolina. His life of service extended beyond churches into the communities where he lived. For 19 years, through Louisville, Kentucky’s Metro Housing Authority’s Iroquois Homes, he sought to improve the living conditions, provide a safe environment, secure job training, start a GED program and continuing education classes and sports leagues for low income residents. He served as a Legislative District Chairman for the Republican Party and a past president of the Optimist Club.

What motivated Joel to a life of self sacrifice in the cause of the gospel were not the many accolades he received but the heavenly treasures he laid up as a firm foundation for the coming age so he could take hold of the life that is truly life.

The KBF is honored to be the fiduciary in perpetuating the Christian legacies of this mother and son through these important ministries: Oneida Baptist Institute (Kentucky), Clear Creek Baptist Bible College (Kentucky), St. Jude’s Children Research Hospital (Tennessee) and Camp Kudzu (Georgia).

Barry Allen first met Flora Dalton of Kennesaw, Georgia by telephone. Her nephew, Jim Cordell, who had retired as the KBC Church Music Department Director, referred her to the KBF to assist in the establishment of an endowment fund to honor the legacy of her son, Joel. Five months later her daughter-in-law, Mary Wilson, a member of Louisville’s Shawnee Baptist Church, brought her to the KBF office for a visit.

During the five months between the phone call and the visit, Laurie Valentine, KBF trust counsel, and President Barry Allen worked with Flora and her financial and estate planning adviser to establish the endowment fund. She was fulfilling a stewardship plan she and Joel had intended to fulfill together before he died. In addition to the gift of appreciated stock, which she used to establish the fund, she made periodic additional gifts during her lifetime and she designated the endowment as the beneficiary of a portion of her estate at her death. She also gave the proceeds from the sale of the car, which would have been her son’s had he lived until his planned retirement date. In the note she sent which accompanied the check, she stated, “I thank God that He has enabled me to do all the things I have done.”

What a joy it is to see how God used this wonderful Christian businesswoman, mother, grandmother and mother-in-law in service to Him.

By: Barry G. Allen-President & CEO
How fortunate we Kentucky Baptists are to be engaged in connecting women, men, girls and boys to Jesus Christ 24/7 in local communities, throughout the state, the United States and around the world through our larger family of Great Commission service ministries. Our Baptist family includes our churches, associations, mission boards, educational institutions, children’s ministries, youth camps, stewardship services, news journals, human need ministries, collegiate ministries, healing ministries and missions support services. Cooperation is still Kentucky Baptists’ way to advance the Kingdom of Jesus Christ at home and beyond.

At different times throughout the year, we give special focus prayerfully and financially to specific aspects of our cooperative missionary, educational and benevolent ministries. Our methodology includes a “week of prayer” and the “collection of a special offering” over and above our on-going giving. We have weeks of prayer and offerings for international missions, North American missions, state missions, associational missions and other selective ministries.

It’s time now to focus on state missions and the collection of the Eliza Broadus Offering. The suggested dates for the “week of prayer and offering” are September 11 – 18. This year’s theme for our focus is “chain reaction,” based upon John 4, Jesus’ encounter with the Samaritan woman at the well, and especially John 4:39a, which records her testimony that resulted in “a chain reaction” among her fellow Samaritans.

I’m praying every pastor and mission leader of every Kentucky Baptist church will contact the Kentucky WMU office now to request the planning guide for use by their churches. Call today toll free 866.489.3534. State missions has taken on a new international dynamic as the whole world has come to Kentucky. As a result, we must adjust accordingly our thinking, planning, praying, going and giving.

Like the Samaritan woman, many Kentuckians are waiting to receive the living water only Jesus can provide. Let’s start a chain reaction where we live by encountering those who are without Christ and telling them where to find the Living Water.

Advancing the Kingdom Through Legacy Giving

Your church, association and the Kentucky Baptist Convention and its agencies and institutions have a wide variety of important ministries that need financial support. Some may need funding to launch them into reality while others could use the support to continue or expand an existing program or ministry. The methods by which you may support these important causes through legacy giving (giving out of your assets, rather than your income) are also wide-ranging.

An outright gift of cash, appreciated securities or real estate is probably the most common, and simplest, way to make gifts during your lifetime.

Other methods of lifetime giving, such as charitable gift annuities and charitable remainder trusts, allow you to set up a future benefit to one or more Baptist causes while retaining an annual income for your lifetime or a term of years.

There are also a variety of methods you can arrange now to benefit the causes of your choice at your death. The most common is a bequest in your Will or Living Trust. Another possibility is to name a Baptist cause as the beneficiary of some portion of your retirement plan survivor benefit, IRA or a life insurance policy no longer needed for family security.

Gifts may be made directly to the benefiting organization or may be given to a third party, such as the Kentucky Baptist Foundation, to manage for the designated beneficiary cause or causes.

Whether you wish to make gifts during your lifetime or at death, there are a variety of ways to by which you can advance the Kingdom by including a legacy gift in your estate plan.
No comments:

Did you read the article in the July 22-24 edition of “USA Weekend” titled “you don’t have to be rich?” What testimonies billionaire couple Bill and Melinda Gates gave in an interview about how every American can give regardless of one’ financial station in life.

As you most likely know, Bill Gates dedicated his life to revolutionizing technology and became the richest man in the world. Then, he decided to give half his fortune away to improve education and combat poverty and disease. Now, the Microsoft co-founder and his wife have a new mission in life, namely, to encourage others, rich and otherwise, to pitch in, too.

Melinda testified “the more you get engaged and the more you learn about giving back, the more you want to do.” She advised we “take some small step to give something of yourself and see where it leads you.”

What really grabbed me was their testimony about why they do what they do. When asked what motivated them to help on such an astonishing scale, both Bill and Melinda had the same reply: “their parents.” Bill stated “I think the easiest way to develop strong beliefs is when you see your parents not only espousing those beliefs but acting on them…Both of us grew up in families big on giving back.” Melinda said “her family also emphasized service to others…That’s why some find it hard to believe this came so naturally to us to give back…but when you grow up in families like that, of course we’re going to…that’s where we come from.”

I, too, had Christian parents who began teaching me at an early age, and holding me accountable, about the importance and the role of Christian financial stewardship in my relationship to Christ and to other human beings. Most everything I know and practice in the Christian discipline of financial stewardship can be traced to my parents’ example. The Bible was their source, and God’s Holy Spirit was their strength and guide.

Oh, God, give us Christian parents who model biblical stewardship for their children!
No comments: