Love is Something You Do- Barbara and Donnie Jett 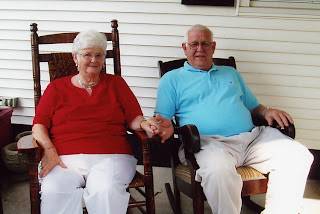 The Kentucky Baptist Foundation was priveledged to work with Barbara and Donnie Jett of Paducah, Kentucky in putting into place a plan that would perpetuate their legacy of love through their church and Sunrise Children’s Services until Jesus comes again. Barbara is now deceased, but that plan will forever remind others of all the ways across the years she and Donnie have demonstrated their love for Christ, their children and grandchildren, their church, the children in the care of Sunrise Children’s Services, and their community.

Barbara and Donnie met through the youth and choir ministries of their McCracken County, Kentucky church. They were married July 6, 1951. The ceremony took place at her house so her father could be present; he was incapacitated by a stroke. Donnie retired from TVA after 28 years, but he also has been a farmer for most of his adult life. They have two married sons: Ronnie and wife, Pam, Larry and wife, Connie, and three grandchildren.

The Jetts are renowned in their community, church and the Kentucky Baptist Convention. Barbara was a leader in Paducah’s Red Cross and the Western Baptist Hospital Auxiliary. Donnie has provided leadership through the PTA and the volunteer fire department. They both taught a Sunday School class at Lone Oak FBC for more than 30 years. Barbara was a leader in the Woman’s Missionary Union and the prayer ministry; Donnie has served through the choir, Royal Ambassador leader, deacon, moderator, treasurer, and made numerous international mission trips.

Their deep love for children manifested itself in a life-long involvement with Sunrise Children’s Services, formerly Kentucky Baptist Homes for Children. Sunrise President Bill Smithwick stated, “Barbara and Donnie have not only supported this ministry to at-risk children with their financial resources, they have invested their lives in children."

They accomplished their giving objectives by donating two separate parcels of appreciated real estate into two charitable trusts for which the Foundation is the trustee. One trust is a charitable remainder unitrust (CRUT) from which they received an income stream jointly while both were living, and from which Donnie will receive an income stream for the rest of his life. At Donnie’s death, the remainder of the CRUT will be used to establish an endowment that will provide a perpetual stream of income to their church for missions, facilities and children’s ministry. The other trust is a term of years charitable remainder annuity trust (CRAT), that is provideing financial assistance for their grandchildren’s education. At the end of the CRAT term, a portion of the remainder will be added to an existing scholarship fund at their church, and a portion will be used to establish an endowment for the perpetual benefit of the mission of Sunrise Children’s Services.

In addition to experiencing the joy of knowing they will be making a lasting difference in this world through these ministries, the Jetts also received the following current benefits : a charitable income tax deduction , no capital gains tax liability when the trusts sold the real estate and their real estate was converted into income producing streams for themselves and their grandchildren.

Donnie stated, “we realized we were only stewards of what God had blessed us with, and we wanted to share it with our family, church and Sunrise Children’s Services. The Foundation was very thorough in assisting us in accomplishing our wishes.”

Thank God for the life of Barbara and may the Lord continue to bless Donnie as he continues to show the rest of us that “love is something you do.” And, may we emulate their example.
No comments:

First, be a priority giver. “Bring the best of the firstfruits” (Ex. 34:26). Second, be a proportionate giver with the tithe as the floor, not the ceiling, of my giving. “Bring the whole tithe into the storehouse … test me … says the Lord Almighty , and see if I will not throw open the floodgates of heaven and pour out so much blessing that you will not have room enough for it” (Malachi 3:10). “The gift is acceptable according to what one has” (2 Cor 8:12). Third, be a premeditated giver. “Each man should give what he has decided in his heart to give” (2 Cor 9:7). Be a periodic giver. “On the first day of the week, each one of you should set aside a sum of money” (1 Cor 16:2). Fourth, be a progressing giver. “But Zacchaeus stood up and said … Look, Lord! Here and now I give half of my possessions to the poor ….” (Lk 19:8). Fifth, be a pleasurable giver. “…for God loves a cheerful giver” (2 Cor 9:7). Sixth, be a perpetual giver. “By faith Abel offered God a better sacrifice than Cain did. By faith he was commended as a righteous man, when God spoke well of his offerings. And by faith he still speaks, even though he is dead” (Hebrews 11:4).

Across the years I have proven both the reasons and the promises Malachi, Jesus and Paul made to the people of God about giving. I urge you to do the same. To the extent we in the Kentucky Baptist Foundation can be of assistance in facilitating your perpetual giving, please give us that privilege.
No comments:

Maximize your giving impact by:

* Determining if the causes will be a good steward of your gift---talk to the organization’s leadership; check out website databases that report on the activities and finances of charities such as http://www.give.org/ (Better Business Bureau’s database on charities that solicit nationally with links to local BBB sites); www2.guidestar.org; and http://www.charitynavigator.org/.

Maximize your tax savings by:

* Giving appreciated assets (stocks, bonds, mutual fund shares, or real estate) rather than cash---the after-tax cost of your gift will be lower than the same size cash gift when you consider both the income tax savings and the capital gains savings you may realize from using the appreciated asset to make your gift.

* Selling depreciated long-term capital gain assets and giving the cash sale proceeds---you’ll get a charitable income tax deduction if you itemize and a deduction for the capital loss.

* Establishing a Donor Advised Fund (DAF). DAF’s allow you to make your gift in a year when the deduction can save taxes, but defer the decision about what causes will benefit from your gift until later years.

*Maximize your income by:

* Setting up a “life income” gift such as a charitable gift annuity or charitable remainder trust. Life income gifts provide an opportunity to set up an irrevocable future gift for charity with the potential to increase current cash flow to you and/or others for life or a term of years. Not only may your cash flow increase, you’ll have tax savings from the deduction of the value of the charity’s interest in the year you set up the life income gift, if you itemize deductions.


The information in this article is provided as general information and is not intended as legal or tax advice. For advice and assistance in specific cases, you should seek the advice of an attorney or other professional adviser.
2 comments:

At the May 10 session of the KBC Mission Board meeting Convention President Floyd Paris observed “the Kentucky Baptist Foundation is probably Kentucky Baptists’ best kept secret.” He continued by bearing testimony and giving examples of how the KBF had facilitated the estate stewardship of some of his church members. Then he encouraged all of the Mission Board members, in the spirit of the More for Christ emphasis, to utilize the KBF services, especially the stewardship education seminars we conduct in churches and with senior adult groups, and the private estate planning consultation service for them and their fellow church members. What a joy it was to get that kind of affirmation and encouragement from our Convention President, and, in the presence of that important leadership group! Needless to say, I was sincerely gratified.

We believe God is the creator and owner of all things, and we are called to be His managers (stewards). How we plan our estates likely will be the single most significant act of financial stewardship we shall ever perform. And, through estate stewardship, each and every one of us, regardless of our financial stations in life, can do “more for Christ.”

So, now the secret is out! What will be your response? There is no cost or obligation for a private, confidential estate planning consultation session by telephone or in person. Neither is there any cost for us to conduct a seminar in your church or senior adult group. We cover such topics, as estate stewardship and incapacity planning, ways to make charitable gifts other than cash, the truth about probate and living trusts and long term care planning.