By: Barry G. Allen- President & CEO
I was struck by Saddleback pastor Rick Warren’s observation and challenge at this year’s Southern Baptist Pastor’s Conference about the way we Southern Baptists keep score on churches. He observed for the past 30 years “we have rewarded attendance.” However, in order to reach the world’s 3,800 remaining unengaged people groups with the gospel in the next decade, he contended we needed to reward “not attendance but reproduction, not size but sending capacity.” So his plea and challenge was for church planting. His method was for churches to plant and parent churches in the U.S. and among the unreached people groups. His conviction with which I wholeheartedly agree was “God blesses the unselfish church.” And, I would add God blesses the unselfish Christian.

I am convinced we cannot expand out sending capacity sufficiently simply by writing checks and placing them and our currency in the offering plates on Sunday mornings. It requires us to steward both out of our incomes and also out of our non-cash assets – out of our estates. And, for most of us Christians how we plan our estates likely will be the single most important and significant act of financial stewardship we shall ever make.

As you prayerfully ponder how God is leading you to do More for Christ and expand your sending capacity, the KBF stands ready to assist you with private estate stewardship consultation to facilitate your life-changing legacy for Kingdom advancement. Please call Laurie Valentine or me toll-free. There is no charge or obligation for this service because it has been paid in advance by the Cooperative Program. 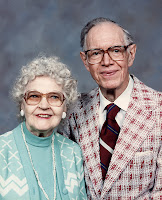 In June 1998, a friend of the Foundation connected the KBF to Fred and Eleanor Dorris with whom he had had a long personal relationship. They were his and his parent’s neighbors during his growing-up years, and fellow church members. Over time he became not only a trusted friend but also a trusted advisor.

The Dorrises had come to the place in their lives, age-wise and health-wise, where they needed to update their estate plans to reflect what they understood to be God’s purposes for the things of this world with which He had blessed and entrusted to them for continued use in His mission after they died.

What an inspiration it was to Laurie Valentine, KBF trust counsel, and CEO Barry Allen to meet and to assist them in putting in place what became their final plans. Working with them, their advisor, and their attorney, the necessary documents were executed by them in August 1998.

Eleanor died in 2003, 14 months after Fred; both were in their 90’s. How fortunate it was for them and their beneficiaries that they had completed and documented their plans long before they became incapacitated prior to their deaths.

What a legacy they left! What a difference for the cause of Christ they will continue to make beyond their lifetimes! After distributions to family, friends and various charities, the remainder came to the Foundation to fund the perpetual endowment, which bears their names, for the benefit of the ministries of their local church, a KBC-related institution, and an SBC-related institution. This represented the largest single bequest the Foundation had ever received.

Throughout their lives, they lived well below their means, and they believed financial independence and helping others were more important than displaying high social status. They discovered the truth of Jesus’ teaching about being “rich toward God” and that one’s life does not consist in the abundance of one’s possessions (Luke 12:13-21).

May the Lord add His blessings to the lives of the multitudes who in the unfolding future will be connected to Jesus Christ by this couple’s faithful generosity.
No comments:

By: Laurie Valentine-COO and Trust Counsel

Leaving an inheritance outright to a young or incapacitated beneficiary is not good estate stewardship.

A “testamentary trust” may be a better alternative.

A testamentary trust for a young beneficiary does not have to end at age 18. You designate in the testamentary trust provisions the age when the trust will terminate and the beneficiary will receive full ownership of his/her share. The full trust amount may be distributed at a single age; or you may want to use a “tiered” distribution----one-half at one age and the rest at a later age; or one-third each at three different ages.

Testamentary trusts may also be used to provide for an elderly or incapacitated beneficiary. The trust provision can direct an income stream (and possibly also principal) to or for the beneficiary for the rest of his/her life; with the remainder of the trust then distributed to other beneficiaries you name at the death of the income beneficiary.

Ease young beneficiaries into the management of inherited wealth and eliminate the burdens asset management might place on an elderly beneficiary by including testamentary trust provisions in your estate plan.
3 comments:

Author Eugene Peterson calls true work “kingwork” to explain how our work is an extension of and participation in God’s work, and therefore, is imbued with significance and dignity. He uses the word to call attention to the essential dignity of true work and to distinguish true work from false work which is spurious, destroys and deceives. He uses the word to emphasize that our work is of a kind with God’s work. All real and genuine work is subsumed under kingwork.

Another author, Ronald Sider, considers work as a way to cooperate in the creativity of the Creator. He suggests work is the way we meet our basic needs and express our basic nature as persons made in the image of God who is Creator. Obviously we cannot create out of nothing, but we are created to use our God-given abilities to cultivate the earth, create new things and expand human possibilities. Jesus’ parable of the talents reminds us of the sharp rebuke of those who fail to use their abilities to multiply their resources.

On this Labor Day 2011 let us be reminded once again of our work as co-creation with the Creator God. Prayerfully ponder the fullness of Christ affirmed in Colossians 1:15-23. The passage includes 15 tremendous assertions referred to as “the great Christology,” but the Apostle Paul also wrote these inspired words for very practical purposes, namely, to instruct a questioning faith and to enrich daily Christian life.

Only in Christ does creation have any meaning. Christ continues His creative work today. A vital aspect of our Christian stewardship responsibility is to participate with Christ in restoring and recreating by means of our daily labor, our “kingwork.”
No comments: