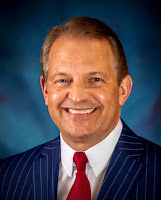 I recently introduced the chairman of Kentucky Baptist Foundation’s Board of Directors, Dr. Charles Barnes, as “Mr. Kentucky Baptist.” What an honor it is to serve alongside such a legendary denominational leader! Jesus said in Matthew 7:16, “You shall know them by their fruits.” Reading his biography gives great evidence to a life of service, commitment and Christ-like humility.

Charles has a career punctuated as a distinguished banker (retired), mayor of River Bluff, chair of the Downtown Louisville District, director with the Kentucky Chamber of Commerce and Man of Year Award from the University of Louisville School of Business.

Baptist Roots. Attending a Baptist high school and college was an integral part of Charles’ spiritual development. He is a graduate of Oneida Baptist Institute and Cumberland Junior College. Later, he would serve as chair of the Board of Trustees at Cumberland College (now University of the Cumberlands).

Church Commitment. Charles has been faithful in building meaningful Christian relationships and supporting his local church. As a member of Hurstbourne Baptist Church in Louisville, he has served as Adult Sunday School teacher, chair of deacons, moderator, chair of Business and Finance Team, Missions and Evangelism Team and interim church administrator.

Denomination Service. Dr. Barnes has modeled the way a layperson can serve the Lord. President of the Kentucky Baptist Convention, chair of the Administrative Committee and Business and Finance Committee and the chairman of the Financial Board of The Southern Baptist Theological Seminary. Most notably, he is the longest serving KBF board member, interim KBF president and a consultant. Former KBF President Barry Allen stated, “Charles, your life has reflected a sense of success, but with humility, at your ability to integrate that ‘first things first principle’ into the various aspects of your personal and professional life.”

Personal reflection. I was asked to write a short article about life in Christ. I immediately thought of Charles Barnes as a living illustration of a person who represents our Lord in such a magnificent manner. Every Baptist leader should have the privilege to learn “how to manage a committee meeting” from Charles Barnes — courteous, focused and prepared. However, it is how he interacts with people that allows Charles to excel as a Baptist statesman. Through the years, I have watched Charles from a distance and up-close. He is the same authentic person that only wants the kingdom of our Lord to advance. We need more Charles Barneses in our Baptist world.

Recently, Charles and I had breakfast at one of his favorite restaurants — First Watch. We both ordered the same meals as in previous meetings. But it was his personal stories that became the real meal for me. He took me back to KBC leaders like Boswell, Owen, Marshall, Mackey, Chitwood and Eldred Taylor who can easily provide a map for our future leaders to follow. Time will tell how we learn from our history, but during this season we have been blessed by one who has given his life to unify Kentucky Baptists. Thank you, Charles, for your service and to his wife, Shelva, for sharing him with us.
French Harmon is president of the Kentucky Baptist Foundation.

The information in this article is provided as general information and is not intended as legal or tax advice. For advice and assistance in specific cases, you should seek the advice of an attorney or other professional adviser.
This article was reposted from Kentucky Today.
1 comment: