Give What You've Got: The Wootons 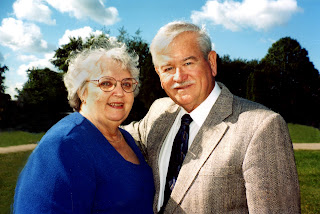 If a couple ever understood the truth of Jesus’ miracle in feeding the four thousand (Mark 8:1-13), it was Shirley and Bob Wooton. Furthermore, they didn’t just talk about what they would give to God if they had a million dollars because they knew God is not interested in what someone “would give if.” He’s interested in what a person or couple is giving right now with “what they’ve got,” modest as it may seem to some. The Kentucky Baptist Foundation is honored to have played a part in facilitating Bob and Shirley’s stewardship and understanding that Jesus will multiply what they gave. He calls us to do what we can, and then He’ll do what we can’t.

Shirley, who passed away in 2010, was born in Louisville and reared on her parents’ farm in Shepherdsville. Her dad also worked for the L&N Railroad, and her mother was a homemaker. Bob was born and reared in Hyden; his father was a schoolteacher and a coal miner, his mother was a homemaker. During high school, Bob’s algebra teacher advised him to become an engineer. So, in the spirit of the mountain culture Bob’s parents moved to Louisville so he could attend U of L’s Speed Scientific School, which he did following his graduation from Louisville’s Southern High School. Shirley’s parents moved to the same neighborhood, and she also graduated from Southern High. It was their mothers who introduced them, and after two years of dating they were married September 18, 1959 at Little Flock Baptist Church, Shirley’s home church. According to Bob, “it was an arranged marriage.”

Following Bob’s graduation from U of L’s Speed Scientific School, the couple moved to Dayton, Ohio, where Bob utilized his engineering skills in the military division of NCR. In 1971 his division transferred to St. Petersburg, Florida. In 1974 Bob joined IBM in Lexington, and they moved to Versailles. Versailles Baptist pastor Henry Johns became their pastor and dear friend. After retiring in 1991, they returned to Louisville. Cedar Creek Baptist Church is their church home.

During the Ohio years, Shirley was housewife and mother to their three children, who are now: Shirley Jo Trimble of Cullman, Alabama, John in Lexington, and Jennifer Krajewski of Indianapolis. Their two grandchildren are Robbie Trimble and Kaitlyn Wooton. Once back in Louisville, Shirley became a perpetual temporary assistant for the KBC Mission Board, the Western Recorder and the Foundation. She became part-time in the KBC Music Department from which she retired.

Before Shirley’s death the Wooton’s called upon Laurie Valentine, KBF trust counsel, and KBF CEO Barry Allen to assist them in carrying out the stewardship plan they had concluded the Lord had lain upon their hearts. Years before, Shirley’s parents had donated a parcel of their farm for use as a volunteer fire station, because their community needed a fire department. In the conveyance of title there was a provision that the property would be returned to their family if and when it ceased to be used as a fire station. That day came, and the property reverted to Shirley and her brother.


There was no question in Shirley and Bob’s minds they needed to tithe the value of her interest in the property. They had always been faithful in their giving, and realizing the reversion of this property was a special gift from God, they wanted the tithe of it to be used from something really special and enduring in the accomplishment of Christ’s mission. Over the years, the Wootons had faced some very serious medical challenges in their lives and the lives of their children. God never failed to provide what they needed to meet those challenges. By their own testimony, they are just plain, simple, modest people who have received countless blessings from the Lord, and wanted to demonstrate through this experience their love for Him and for those in need of Him.

In the Fall of 1997 Shirley and Bob established with the Kentucky Baptist Foundation the Robert M. and Shirley Wooton Endowment Fund for the perpetual benefit of the KBC’s Missionary Assistance Program, which provides salary and benefit supplements to directors of missions and mission pastors in Kentucky. Until Shirley began her work at the KBC, they knew very little about state missions work, but had an awareness of the needs of small churches from their small church pastor son-in-law, Dennis Trimble. Never before had they been in a position to contribute materially in such a way, but the Lord had provided, and their sense of stewardship said “we need to tithe its value.”

So, the fire station property has been given twice. Instead of focusing on what they did not have, and using what they did have, Shirley and Bob made a lasting difference in the lives of the multitudes who will touched by the Kentucky Baptist missionaries who will benefit from their generosity. It is also a wonderful memorial tribute to the life of Shirley. The question for the rest of us is, “will we give what we’ve got?”